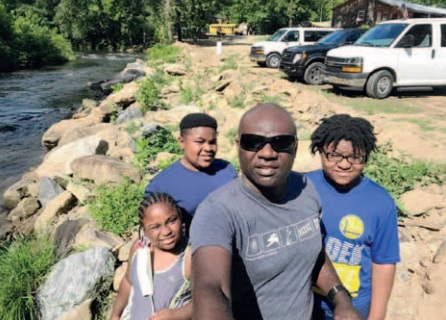 It’s a week before Joe Biden’s inauguration when we make a video call with Jean Sammuel. We have to call him this week because next week he isn’t available. That’s because then the inauguration will take place. “Are you going to celebrate then?” I ask. “No, I have to work. Riots are expected and all over the country policemen and security guards like me are being called to help. ” It is clear that Jean has his affairs in order and has a great sense of responsibility. But that has certainly not always been like this in his life…

“My mother died when I was three months old. My father was out of the picture and my grandmother was taking care of me. We lived in the southeast of Haiti, in Thiotte. I was about six years old when we moved to Cité Soleil, a slum in Port-au-Prince. We were terribly poor. I remember walking far to get food from the government food program. Then you had to queue for hours, and as a little guy I was often pushed aside. Food was also often fought over. That was a really scary time. ”

“My grandmother went to a church nearby. The pastor saw how we were struggling and introduced my grandmother to Johan Smoorenburg. That’s how I ended up at the children’s village of Heart for Haiti, as one of the first children of the project. There was food and I didn’t have to fight for it! We slept in a big building, where we were safe! It was a difference of night and day for me. We had a good time with the boys in my apartment, I am still in touch with many of them. ”

All the while, Jean thinks that he has no family except his grandmother. Until one of the boys from his apartment is visited by an aunt. “She asked where I was from, and it turned out that she was from my hometown. In fact, she recognized my story and thought she knew my father too! ” Contact is made and Jean gets the surprise of his life: “It turned out that I still had a whole family! My father was still alive, but I also had (half) brothers and sisters, aunts, uncles… it was an emotional reunion. That was all I always wanted. We still have a lot of contact, although the family is spread over different countries. ”

Jean is in his early 20s when he finds his family again. By then he was trained as a translator. “I translated many official documents, such as adoption papers. As a result, I also had a lot of contact with people in America, who invited me to visit them. I met my wife there. We got married and had three children, who are now 15, 11 and 8 years old. ” Jean is grateful how his life has taken a turn. He explains: “In Haiti you often have the feeling that you can hardly make a difference. But investing in a child is the best you can do, as my story shows. ”